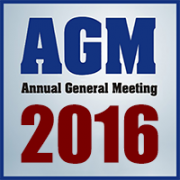 TO ALL MEMBERS – NOTICE OF ANNUAL GENERAL MEETING

Members wishing to be included in the ballot for election of Directors shall lodge with the secretary, a notice in writing signed by two members and signed by the prospective candidate, indicating his/ her willingness to be nominated. This notice should reach the office above by Friday 12th August 2016. A short profile of the candidate should accompany the nomination. Only members whose annual subscriptions are fully paid up will be allowed to nominate and vote in the election.